My name is actually Jayne, well no, it's Jane but I decided at age 8 it would be Jayne, when I saw it written on a hairbrush in cursive writing: Lady Jayne. It seemed far more elegant. I decided then and there to be Jayne and made everyone, including my parents, call me such. On the pendant mum gave me after she died she wrote Dear Jayne, love forever, Mum, which might have been the first time she agreed to add the Y. It has created all sorts of nuisance and I never had it officially changed so I'm constantly getting calls from all official people saying What the-. Names are dumb. In my Golden Books you can see my name written as Jane, Janine, Jeannie, Elizabeth and Sarah. Why do we have to keep just one? What if we change our mind? I want to be lots of people. Also I had a dumb surname - Tuttle - that forced you to articulate the 'T' sound with confidence in Grade 4 lest your name be written down as 'Tuddle'. I dreamed of marrying a solid name like Smith or Davis, and then four months before I did, I watched Brazil. Tuttle forever.

My friend Jane employed me once to answer phones for her burgeoning marketing business. It was confusing to be another Jane, so I decided this was the perfect time to try on the name I'd wanted since drama school: Jet. It's actually my initials.

When you take a name it isn't in you. You have to wear it, breathe it, let it meld into your being, preferably from birth. What astounded me, was nobody seemed to hear Jet.

And then they'd just call me Jayne.

I wanted to be Jet so bad I'd have given anything - it was a sharp, slick, confident name. Of course it slid off me like a dinner roll.

Posted by The Existential Bunny Rabbit at Thursday, June 09, 2016 No comments: 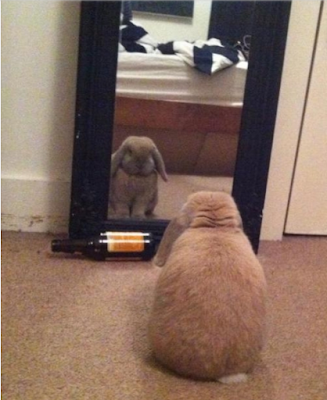 Posted by The Existential Bunny Rabbit at Thursday, June 09, 2016 No comments: