The Wreck of the Hespress 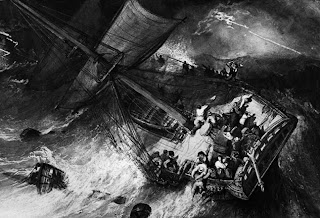 I wonder where mum got it from.  Was it one of those things that got handed down from her mum?  Without her ever quite knowing what it was?  You know how you adopt those things that you don’t always understand and say them anyway?
For fact’s sake, the Wreck of the Hesperus is a poem by Henry Wadsworth Longfellow about a proud sea captain who takes his daughter on his ship and because the captain is so proud he ignores some weather guy’s warning about a big hurricane coming and there’s a terrible storm and the captain ties his daughter to the mast to try to save her and then they have a massive shipwreck and the next day the captain finds his daughter still attached to the mast, dead, drifting in the surf.
It was a pretty bad shipwreck, the Hesperus.  All terror and upheaval, wild crookedness, violence… a lot like your Rabbit in the mornings.  Mum was right.  But I still wonder how she knew about it.  Did she read the poem?  She couldn’t have googled it.
I see that Wreck of the Hesperus is also an Irish doom metal band. 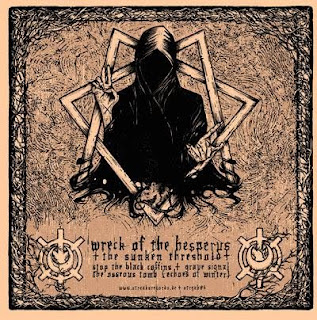 And that definitely fits.
Posted by The Existential Bunny Rabbit at Monday, September 13, 2010

Email ThisBlogThis!Share to TwitterShare to FacebookShare to Pinterest
Labels: Wreck of the Hesperus